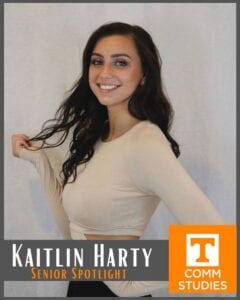 Kaitlin Harty is a senior Communication Studies major from Salisbury, Massachusetts and will be attending Boston University in the fall for a Master’s of Science in Public Relations.
Kaitlin began her journey on Rocky Top after transferring here from The University of Texas, at Austin, her Junior year. Since then, she has excelled in her academics through her outstanding work ethic and has consequently qualified herself for the status of magna cum laude on the dean’s list each semester. On top of this, Harty was also honored by being named as a 2019-2020 First-Year SEC Academic Honor Roll student.
In addition to Harty’s academic achievements, she was also a Division I collegiate athlete for the University’s Lady Volunteer’s swimming team. Undoubtedly, Kaitlin has demonstrated her passion for both academics and athletics after being named to the prestigious 2021 Women’s Swimming & Diving NCAA Championship team.
“My time here on Rocky Top has not only been a blessing, but an honor. I would not have been able to set such an amazing path before myself without having been here. Every professor that I have encountered has become a mentor and friend to me, in which I know I will have on my side throughout life. I want to specifically recognize Professor Mike Kotowski for the enduring support and encouragement he has unconditionally given me. He has helped me in life more ways that I can count, has challenged me intellectually, and most importantly, put up with my one million questions about communication theories that I had and continue to have”.
“Overall, I am beyond excited to begin my next chapter of life at Boston University, later this year. I hope to one day be the general manager of the Boston Bruins NHL team, but for the time being, I look forward to working with scholars and intellectuals within my field and hopefully being able to contribute to the communications field by publishing my own scholarly article(s) one day”.