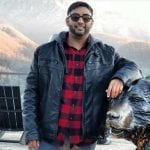 Vikesh Desai is a transfer student from Tanzania, East Africa, and also lived in India for 6 years where he was attending school for his Bachelors in Electronics and Communications Engineering. “Three years ago when I got the opportunity to come to the United States to start a new life, I did not give it a second thought and hoped on the plane.”
Having lived in 3 different continents with different cultures, Vikesh is fluent in 4 different languages; English, Swahili, Hindi and Gujarati. “The Communications Studies major at UTK grabbed my attention when I first got to the United States in 2017, and hence the change in my major. I have also been a part of CMST club, which allowed me to interact with other faculty members, students and alumni. This major has made me elevate my skills far beyond the classrooms.”
Vikesh has worked as a part-time sales associate for 3 years now. He is actively seeking a job where he can put his advanced skills to work and benefit his employer. He hopes to find a position soon in either Sales, Marketing or Management.
We are proud of you Vikesh! 🧡