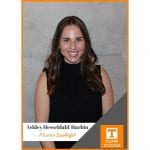 Ashley is a Tennessee native – growing up in Dandridge, a small-town east of Knoxville.

In 2015, Ashley received her Doctor of Jurisprudence after attending Charleston School of Law and the University of Tennessee College of Law. During law school, she served as a member of the Moot Court Board, Student Bar Association, Maritime and Admiralty Law Journal, and student attorney for the UT Legal Clinic. In 2016, Ashley became a licensed attorney and was admitted to practice before the Tennessee Supreme Court and all other Tennessee state courts.

In December of 2018, Ashley joined the Office of Senate Majority Leader Jack Johnson to assist and advise on policy and research. In her current role, she formulates and coordinates policy dealing with a variety of legislative issues and constituent concerns. She is primarily responsible for providing Members of the State Senate with support, research and advice regarding the Governor’s legislative agenda, as well as serving as legal counsel to the Senate Majority Leader.